“In 2012 we have made great operational, clinical and commercial progress,” says Eduardo Bravo, CEO of TiGenix. “We have significantly advanced in all our clinical programs, which are fully on schedule; we have obtained national reimbursement for ChondroCelect in the Netherlands, and we have continued to build our presence in other European markets and across the Middle-East. And in December, we raised funds from specialized healthcare investors, both domestic and international ones. We are on the cusp of a number of key milestones that should further strengthen TiGenix’s position as the European leader in cell therapy.”

This excellent result in the commercial roll out of ChondroCelect reflects the continued sales growth in Belgium and in the Netherlands after the reimbursement obtained in both countries respectively in May 2011 and in June 2012.

In addition, in 2012 TiGenix has put in place a broad market access strategy to further grow sales. Aside from Belgium and the Netherlands, ChondroCelect is reimbursed on a case-by-case basis in Germany (NUB4 status), and by selected primary care trusts in the UK. Additionally, two leading private insurance companies in the UK have started to reimburse ChondroCelect on a routine basis. Private insurance groups in Spain have reimbursed a limited number of patients. TiGenix is pursuing national reimbursement in Spain and France and expanded reimbursement in Germany and the UK.

Outside TiGenix’s core commercial countries, the Company closed a distribution agreement for the Middle-East, with Genpharm. An agreement with the Finnish Red Cross Blood Service for Finland has been in place since the end of 2011.

Cx601 is TiGenix’s most advanced clinical stage product and has completed a Phase II study, published in October 2012 in the International Journal of Colorectal Disease. Cx601 is an adipose derived allogeneic stem cell suspension (eASC) for the treatment of complex perianal fistulas in Crohn’s disease patients. Cx601 has been granted orphan designation by the EMA. Ethics committees and regulatory agencies in all of the eight participating countries have approved the protocol of the phase III study, and patient recruitment is progressing on plan. The main objectives of the study are to demonstrate safety and superior efficacy over placebo in perianal fistulas in Crohn’s disease patients who failed to respond to previous treatment(s), in most cases biologicals, and to confirm the strong safety and efficacy results of the Phase II trial. Final results of the trial are expected in 2H 2014, and, if positive, should allow the Company to file for marketing authorisation with the EMA in the first half of 2015.

Partnership discussions are ongoing for co-development and commercialization of Cx601 in different regions.

Cx611 is an allogeneic eASC product candidate for the treatment of RA. This is the most advanced trial in the world with stem cells in RA and the Company expects to report final results in April 2013. Positive interim safety results were reported in December 2012. This multicenter (20 centers), placebo-controlled study enrolled 53 patients, divided in 3 cohorts with different dosing regimens. The objective of the trial is to determine safety, feasibility, tolerance, and optimal dosing, and obtain a first indication of efficacy in this very difficult to treat patient population that has previously failed to respond to at least two biologicals. TiGenix expects that the phase IIa results will set the stage for the further development of Cx611 in RA, and potentially in a wide range of other autoimmune disorders.

Cx621 is an allogeneic eASC product candidate for the treatment of autoimmune diseases via a proprietary technique of intra-lymphatic administration. In July 2012, TiGenix successfully concluded a phase I study to assess safety, tolerability and pharmacodynamics of intra lymphatic administration of Cx621 in healthy volunteers. The Company filed a patent for this novel route of administration and is currently evaluating in which autoimmune indication eventually move the product forward into the next clinical stage of development.

On September 19, TiGenix appointed Jean Stéphenne chairman and Russell Greig member of the Board of Directors. Both are former members of the Corporate Executive Team of GlaxoSmithKline, and have a sterling track record that will be of immense value as TiGenix enters into a pivotal phase of its growth with the commercial roll-out of ChondroCelect and the advanced clinical development of its cell therapy programs.

Key approvals for manufacturing facilities in the Netherlands and Spain

Financial results for the full year 2012

Key figures (Thousands of Euro, except number of employees) 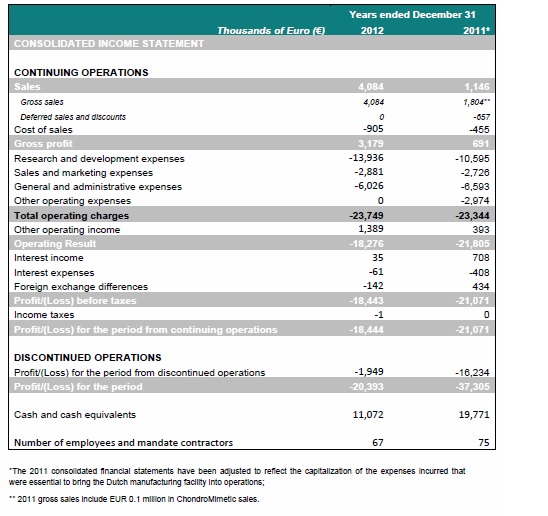 Operating loss for the period amounted to EUR 18.3 million compared to EUR 21.8 million in 2011, or a 16% decrease, as a result of the increase in sales and an important increase in “other operating income” related to grants.

The net loss for 2012 amounted to EUR 20.4 million compared to EUR 37.3 million in 2011. Net loss in 2011 was significantly impacted by an extraordinary non-cash charge for EUR 16.2 million for impairments related to discontinued operations (TiGenix Ltd).

TiGenix raised EUR 6.7 million in financing activities through a private placement from domestic and international specialized investors. The placement was priced at a 9% discount on the average closing price of the previous 30 days, and the offering was twice oversubscribed, demonstrating a clear interest of healthcare investors in the Company.

At December 31, 2012, the Company had EUR 11.1 million cash at hand. The net cash used in operating activities during the period amounted to EUR 17.7 million, slightly below the operating cash burn in 2011, and in line with the Company’s effort to increase efficiency and to carefully manage its operational cash flow.

In addition to its ability to attract dilutive funding, TiGenix has successfully secured EUR 2.1 million in 2012 in non-dilutive funding from grants and soft loans.

Outlook for the next 12 months

The 2012 financial statements can be found in the investor section on our website www.tigenix.com

TiGenix NV (NYSE Euronext Brussels: TIG) is a leading European cell therapy company with a marketed cell therapy product for cartilage repair, ChondroCelect®, and a strong pipeline with clinical stage allogeneic adult stem cell programs for the treatment of autoimmune and inflammatory diseases. TiGenix is based out of Leuven (Belgium) and has operations in Madrid (Spain), and Sittard-Geleen (the Netherlands). For more information please visit www.tigenix.com.