“We have made very good progress on all fronts during this year,” said Eduardo Bravo, CEO of TiGenix. “In Grifols, we have added a first-class strategic investor which not only validates our technology platform but strengthens our financial position. ChondroCelect growth remains strong. For Cx601, the regulatory path in the United States has been confirmed and patient recruitment for the phase III trial is progressing well. We will maintain the pace of continuous delivery during 2014, with concrete advances to be announced in the short term”.

ChondroCelect sales grew 25%, on track to become a cash flow positive asset in 2014

ChondroCelect sales for the year have grown 25% to EUR 4.3 million, compared to EUR 3.4 million in 2012 on a like-for-like basis. ChondroCelect sales for the fourth quarter of 2013 amounted to EUR 1.2 million, up 38% over the same quarter last year, with revenues still mainly fueled by sales in Belgium and the Netherlands. Growth is expected to accelerate in 2014 with the increasing contribution of sales in the UK and Spain. We reiterate our objective for ChondroCelect to become a cash flow positive asset in the course of 2014.

Patient enrolment in the ADMIRE-CD trial, the Company’s pivotal European Phase III clinical trial for Cx601, is progressing. Recruitment is ongoing at more than 50 centers in 8 countries and should be completed in 2014. Final results are expected in the third quarter of 2015 and, if positive, will allow TiGenix to file for European marketing approval in 2016.

In December 2013, TiGenix held an end-of-phase 2 meeting with the Food and Drug Administration (FDA) concerning the development of Cx601 in the United States. The objectives of the meeting were to discuss the adequacy of the existing non-clinical package to support an IND for a US-based phase III trial, to obtain guidance on the design of such a trial, and to confirm the acceptability of using the data from the ongoing ADMIRE-CD phase III study in Europe to support a BLA filing. Based on the affirmative feedback received on these three points, TiGenix is starting the technology transfer to a US Contract Manufacturing Organization (CMO) and the preparation of the application for a Special Protocol Assessment (SPA) that will allow the filing of an IND for phase III in 2015.

The Company is also re-opening discussions concerning the partnering of Cx601 in different regions.

In October, TiGenix presented the results of its Phase IIa study of Cx611 in refractory rheumatoid arthritis (RA) in a plenary session of the American College of Rheumatology Annual Meeting. Working closely together with an advisory board of international key opinion leaders on the appropriate design of follow-up studies for Cx611 in inflammatory and autoimmune disorders, TiGenix expects to finalise and announce the next steps of the development plan in the coming weeks.

In October, Dutch authorities renewed TiGenix’s Good Manufacturing Practice (GMP) licence for its state-of-the-art cell therapy manufacturing facility in Sittard-Geleen, the Netherlands. This renewal allowed the Company to complete negotiations which culminated in the agreement signed in January 2014 to sell the Company’s Dutch subsidiary which owns the facility to PharmaCell. On top of the EUR 4.25 million cash to be received (of which EUR 3.5 million will come in 2014), the sale will reduce organisational complexity and eliminate an important part of the Company’s fixed costs while maintaining ChondroCelect supply.

In March 2014, co-founder Gil Beyen (Gil Beyen BVBA) resigned from the Board of Directors to assume other responsibilities outside of TiGenix.

Financial results for the full year 2013

Key figures (thousands of Euro, except number of employees and mandate contractors) 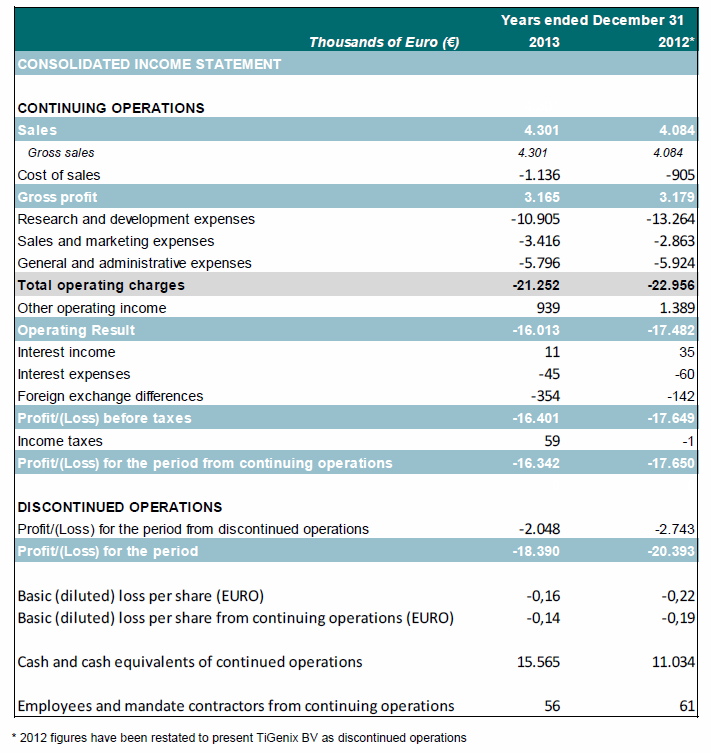 ChondroCelect sales for the twelve months to December 31 2013 have grown 25% to EUR 4.3 million, compared to EUR 3.4 million in the same period of last year on a like-for-like basis. Revenues in 2013 have been mainly driven by sales in Belgium and in the Netherlands while additional growth is expected to be fueled by sales in the UK and in Spain where reimbursement was obtained during 2013.

The net loss for 2013 amounted to EUR 18.4 million compared to EUR 20.4 million in 2012. The reduced net loss in 2013 is a direct result of the reduced operating loss of the Group’s continuing operations as well as of the reduced loss for the period by the wholly-owned subsidiary, TiGenix BV. In line with the decision taken during 2013 to sell this company, this is shown as discontinued operations.

In 2013, TiGenix raised a total of EUR 18.5 million through two private placements from domestic and international healthcare-specialised investors. The latest equity increase for EUR 12 million took place in November 2013 and was fully subscribed by Grifols through its wholly owned subsidiary Gri-Cel.

In addition to its ability to attract dilutive funding, TiGenix successfully secured in 2013 a total of EUR 2.7 million of non-dilutive funding from grants and soft loans.

In December 2013, TiGenix announced the signing of a structured debt financing agreement of up to EUR 10 million with Kreos Capital, Europe’s largest and leading provider of debt to high-growth companies. The loan can be drawn down in three tranches at the Company’s discretion.

At 31 December 2013, the Company had EUR 15.9 million cash in hand, not including the EUR 10 million available from the loan agreement signed with Kreos. Average monthly cash burn for the year has been reduced to EUR 1.1 million.

Outlook for the next 12 months

The 2013 financial statements can be found in the investor section of our website www.tigenix.com

TiGenix NV (NYSE Euronext Brussels: TIG) is a leading European cell therapy company with a marketed cell therapy product for cartilage repair, ChondroCelect®, and a strong pipeline with clinical stage allogeneic adult stem cell programs for the treatment of autoimmune and inflammatory diseases. TiGenix is based out of Leuven (Belgium) and has operations in Madrid (Spain), and Sittard-Geleen (the Netherlands). For more information please visit www.tigenix.com.