Ysios BioFund II Innvierte institutional investors include: CDTI (Spanish Ministry of Economy) through its Innvierte program; the European Investment Fund (EIF) and the European Commission through InnovFin SME Venture Capital, a financial instrument developed under the EU Framework Programme for Research and Innovation Horizon 2020; as well as other investors such as Orza, Lagun Aro, Banc Sabadell (BIDSA), Bernat family office and Bankinter, among others.

Ysios BioFund II Innvierte has a strategy similar to predecessor fund Ysios BioFund I,(currently under divestment) in that it aims to invest in biotech, medtech and diagnostic companies across Europe with a special interest in Spain. The fund will finance up to 15 early-stage (start-up) and development phase companies with disruptive products, platforms or technologies that address unmet medical needs.

Ysios BioFund II Innvierte has a strengthened and expanded investor base, attracting both returning investors as well as new investors. These include institutional investors both at a national and international level, including CDTI (Spanish Ministry of Economy) through its Innvierte program; the European Investment Fund (EIF) and the European Commission through InnovFin SME Venture Capital, a financial instrument developed under the EU Framework Programme for Research and Innovation Horizon 2020; pension funds such as Orza and Lagun Aro; Banc Sabadell (BIDSA) and private investors. 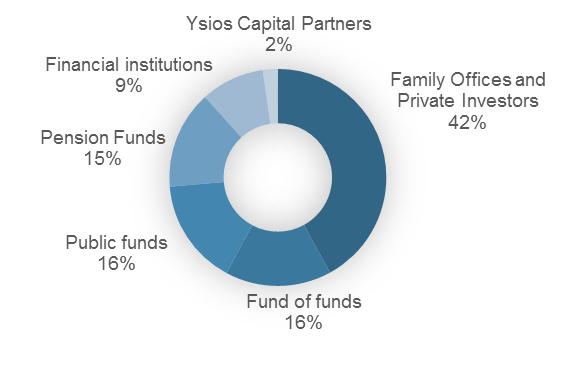 “We have exceeded our initial closing target. Ysios BioFund II Innvierte has become one of the biggest specialized biotechnology funds in southern Europe,” said Julia Salaverria, partner at Ysios Capital Partners.  “We are very grateful to have the backing of many exceptional investors who have shown confidence in Ysios Capital’s work and in the potential of the biotechnology sector.”

“The success of our second fund is the result of the excellent work of a committed international and multidisciplinary team,” added Joel Jean-Mairet, partner at Ysios Capital. “With our recent investments we have been able to attract specialized international funds and corporate venture funds to Spain, which represents an inflection point for the country´s biotech sector. In 2015 alone, Ysios Capital portfolio companies in Spain have been capitalized with 100 million euros.”

Carlos Moedas, European Commissioner for Research, Science and Innovation, said: “Thanks to the equity products developed under Horizon 2020, the EU today invests directly into some of Europe’s most promising companies in the biotech, medtech and diagnostic sectors. By providing finance for innovation in this way, we support the development of tomorrow’s healthcare solutions.”

“This new deal with Ysios Capital targets small and medium sized businesses, which often lack accessible financing options. With its unique position in the market, Ysios Capital will play a valuable role in helping Spanish start-ups and spin-outs. The EIF is pleased to be working with this fund, whose objectives are in line with our mission to support innovative SMEs across Europe,” said Pier Luigi Gilibert, chief executive at the European Investment Fund.

InnovFin SME Venture Capital is an early stage equity product offered in cooperation with the European Investment Fund aims at improving access to risk finance by early-stage RDI-driven SMEs and small midcaps through supporting early-stage risk capital funds that invest, on a predominantly cross-border basis, in individual enterprises. SMEs (and small midcaps) located in Member States or in Horizon 2020 Associated Countries are eligible as final beneficiaries. The aggregate investments to venture capital funds made out of InnovFin SME Venture Capital are expected to support between EUR 1.6 to EUR 2 billion of equity financing to final beneficiaries.

The European Investment Fund (EIF) is part of the EIB Group. Its central mission is to support Europe’s micro, small and medium-sized businesses (SMEs) by helping them to access finance. EIF designs and develops venture and growth capital, guarantees and microfinance instruments which specifically target this market segment. In this role, EIF fosters EU objectives in support of innovation, research and development, entrepreneurship, growth, and employment.